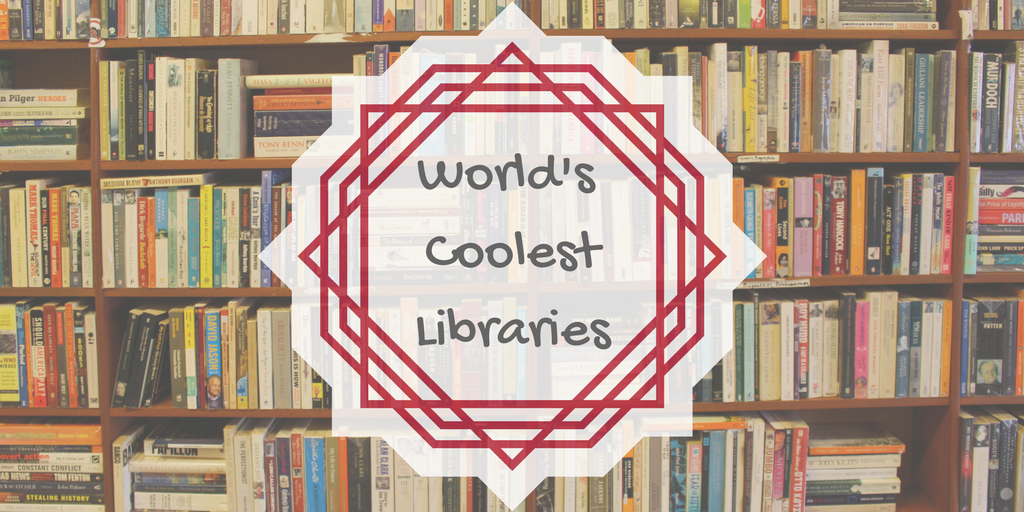 These world-famous libraries are some of the most beautiful, unique and spectacular buildings in the world. From the old to the new, the busy to the simplistic, the grand to the quaint. There’s a library out there that is sure to intrigue every person’s mind.

We’ve compiled a list of some of the worlds famous libraries on this planet. So get your suitcases ready, because once you’ve seen these amazing libraries you will definitely want to go visit them.

Located in the heart of Dublin, this 18th Century Library is the largest library in Ireland housing over 6 million books. It is also the home of the Book of Kells, one of the last remaining copies of the 1916 Proclamation of the Irish Republic and The Trinity College Harp (Brian Boru harp) dating back to the 15th Century. The main feature being the 65-metre Long Room. Home to 200,000 of the library’s oldest books and lined with busts of the philosophers and writers of the western world and men of The Trinity College. This famous library is located in the centre of the University of California. In 1995, it was named after Audrey and Theodor Seuss Geisel, better known as the famous children’s author, Dr Seuss. This library houses the Dr Seuss collection of his original drawings, drafts, audios and memorabilia. It is also home to over 7 million volumes.

Based in the centre of Rio de Janeiro this Brazilian Gothic looking library is home to over 350,000 titles. With the large stained-glass dome, the tall wooden bookcases and the giant iron chandelier this library really is a thing of beauty. It houses the largest collection of Portuguese work outside of Portugal and is home to a collection of art pieces which holds historical elements.

Library at the Benedictine Monastery of Admont: Admont, Austria

Situated on the Enns River in the town of Admont, it is the worlds largest monastic library. Divided into three sections this library is full of books, art, history and architecture. Home of 200,000 volumes it also houses some magnificent ceiling paintings and sculptures. Some of its most prized possessions are 1400 manuscripts (the earliest dating from the 8th Century) and 530 books printed before 1501.

The library of the Dutch Parliament holds every record of parliamentary hearings and discussions. Built in the 1970s, there was no electricity at this time so the library was constructed with a large leaded glass dome to let as much light in a possible, to protect it from possible damage or disaster from candles and gas lamps.

This newly built library opened its doors in October 2017 as part of the Binhai Cultural Centre. Designed to look like an eye, hence the name, the large luminous sphere in the middle of the library is said to represent the iris of an eye. This can be seen at the park outside through an eye-shaped opening.  The library has the ability to hold up to 1.2 million books with its floor to ceiling terraced bookshelves.

Often described as the ‘cathedral of books’ this 19th Century library holds over 300,000 books. With beautifully designed cast-iron balconies, black and white marble floor and a grand latticed skylight, this library is a very popular wedding venue, and you can see why. The library and collections are open to the public in keeping with George Peabody’s goal to create a library “for the free use of all persons who desire to consult it.”

This perfectly white cubed building is Stuttgart’s public library. From the outside, it doesn’t look like much, but when you enter you are met by a simple but yet very attractive library set up. The library glows at night in a luminescent blue and is cleverly placed to face direct compass points. Each face of the cube is labelled with the countries language it is directing to; English on the West wall, German on the North, Korean on the East and Arabic on the South.

Located in Paris on the banks of the river Seine, this French library holds an extensive collection of historical and cultural titles dating from the 17th Century. The famous Oval Reading Room which accommodates an impressive large oval skylight partnered with beautifully designed circled ceiling windows and arches. 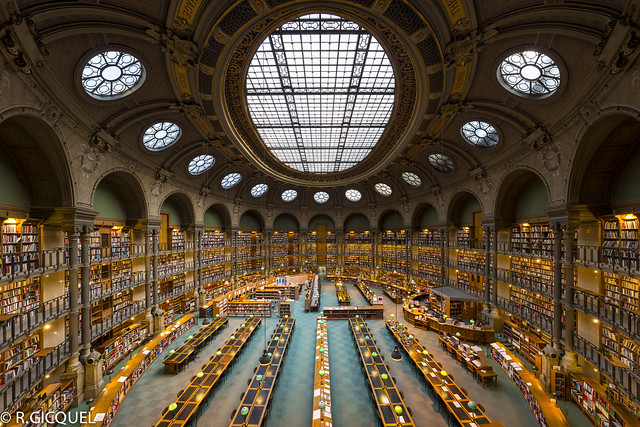 The Mortlock Wing now an exhibition space for the history and culture of South Australia opened its doors in December 1884. The library is home to two galleries beautifully decorated with gold iron balconies and a glass-domed roof. It also holds a number of collections from Rare books to Children’s Literature Research.

Located off the shore of the Mediterranean sea this library sits alongside the ancient harbour of the historic city of Alexandria. The library has space for up to 8 million books and is home to many other libraries & museums within, including a library dedicated to Maps and an Antiquities Museum. The outside is just as impressive with carvings of characters from 120 different human scripts. This is a pretty amazing library and probably our most favourite.

The library is integrated with a botanical garden surrounded by greenery and water, a complete comparison to the environment of the city. It is home to several sculptures by Mexican artists including Gabriel Orozco’s Ballena (whale) which is located in the centre of the library.

This library is part of the small village of Huairou just a few hours away from Beijing. Surrounded by mountains and forest the library is built from screen clad, ordinary sticks and timber fitting perfectly within its surroundings. Only 175 square meters, it has been cleverly designed to become a bright, quiet and unique reading area.

Named after a previous Principal of the University this library is the main academic library for the University of Aberdeen. Opening in 2011 this library contains over 300,000 items across a wide range of subjects. The building is said to be designed in a way to represent/mark the ice and light of the north.